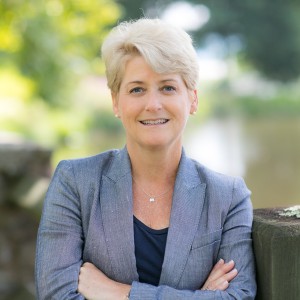 Chief Administrative Officer and Director of Marketing
dvaneersel@uvafoundation.com
(434) 924-0696
Contact Me

Deborah joined the Foundation in November of 2001 to promote the University's research parks and to help foster collaborative relationships between North Fork tenants and the University of Virginia. Since then, her role at the Foundation has evolved to include other important aspects of the Foundation’s operations, including oversight of all corporate human resources and information technology functions, strategic planning, and Foundation marketing and communications programs. Deborah is active in the community and serves on several volunteer boards, including the Thomas Jefferson Area United Way.

Prior to coming to the Foundation, Deborah served as Chief Executive Officer of the Charlottesville Area Association of REALTORS® for 10 years - focusing on business, process and professional development, information technology, strategic planning, leadership development, and legislative affairs. During her tenure, she was instrumental in establishing the Real Estate Weekly, the Central Virginia School of Real Estate and the Charlottesville Albemarle Legislative Action Coalition (CALAC) – now known as the Free Enterprise Forum. In 1997, she received her CAE (Certified Association Executive) designation from ASAE - the American Society for Association Executives.

Deborah received a BA in International Business and French from the University of Nebraska at Omaha, studied for a year at the Université de la Sorbonne in Paris, and is fluent in French. She is married to Michel van Eersel, a professional meeting planner and has a daughter, Katja, a recent graduate of the University of Virginia.